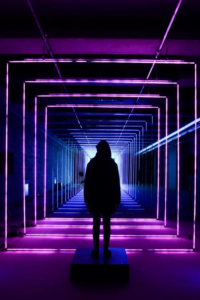 What is education? Central to my own answer is my own experience. If I could sum up in a sentence my quest: that the truth was Christ, that a relational pursuit of Him was key, and that I held an invincible belief in a warm heart animating the cosmos. It’s a comforting thought, that Christ’s heart sustains both me and the universe. Where’d it come from?

For me, everything began in my parents’ home. They were warm, loving, and believed in the importance of reading and asking questions of each other, society, and life. Coupled with my own peculiar and monomaniacal drive for uncovering underlying meaning, this led me to see education as exploration.

Reading was enjoyable, but it was also immersion in stories, from Norse and Greek mythologies, to The Chronicles of Narnia, The Lord of the Rings, to The Chronicles of Prydain.  Such tales captured my imagination with goodness, heroism, and quest. This was coupled to a church in which I breathed in the letters of Saint Paul and applied his ideas in relationally-oriented ways. I can’t stress enough how important this was during my adolescence. Early on, I experienced the love of a tight-knit community of fellow believers, who were not overseen by their parents. Perhaps kids need to be put in Christ-centered environments that are somewhat removed from the birth family.

A final developmental piece was our conversations at meal times.  They were occasions in my late adolescence for theology, philosophy, and political discussions. You see, by age sixteen, and continuing into my early twenties, I grew my own ideas, within a larger Christian framework, but not conflated with my parents’ idiosyncrasies. I had been given opportunities to investigate reality, but with a belief in Christ’s ultimate guiding hand. In the process, I digested Dostoevsky, Solzhenitsyn, Plato, Aristotle, Kierkegaard, Edwards, Percy, Dillard and others. This reading led to modifications in my worldview – and some pitfalls, too. Nevertheless, I persevered. From where I stand now at least, in my early forties, my narrative arc became a dialectical development culminating in an embrace of Orthodoxy.

As I see it today, to be Christian in an Orthodox key is to be communal, liturgical, and Eucharistic. Indeed, it was the fulfillment of one of my deepest instincts, the importance of Christ’s life experienced communally, that brought me to the thickness of Orthodoxy. What this means for any distinctive Orthodox education is, I believe, an unmovable belief that lives are transformed by bringing heaven down to earth and having children participate in acts that are for the life of the world. Schmemann was right, Orthodoxy is true magic that connects and deepens the creation, filling it with the glory of Christ.

Yet my observation of modern education reveals a reality that is far from this vision. Most universities offer no help navigating Life’s Labyrinth, only empty slogans of identity and difference. And most people in that environment don’t approach questions analytically for the purpose of obtaining ultimate answers. Such a tack would (at best) be thought utterly simpleminded. Instead, there is often a breezy, superficial blather that stresses ever larger doses of technology, while claiming the purpose of education is “to train thought leaders” or produce “innovation creators.”

The philosopher in me revolts. It makes me want to drill down and reveal the problems with such clichés. What does it really mean to train thought leaders? Would it mean raising up moral and spiritual giants? Alternatively, would it be the perfecting of an intelligent and ruthless demagogue? A similar contradiction lies at the heart of the phrase innovation creator. Is such a one the unveiler of great truths and a maker of new vertices? Or would he be a sociopath who drags us down into the mire of (hitherto undreamt) addictions? Such a paradigm, unmoored to ethics or God, fetishizing every new technology that comes around, and caring only for a vaguely defined notion of “success” (usually equated to financial, physical, or mental well-being), seems to be where we are culturally. In this model, people become a means and not a dignified end. The focus becomes giving children “skills,” not nourishing their selves.

But a Christian education keeps the soul tethered. When we are truly educated, the head, heart, and spirit breathe. We begin to see things aright and thereby become truly free. And in that freedom, we can love, play, be. We can find and become our true selves, cultivating our garden, and helping remake the world in the divine likeness.