If you are like me, one of the first things you do when you find out you are expecting a child is to give them a name. “If we have a boy, he will be called this…” or “if we have a girl, she will be called that…” After naming 11 (yes, my dear wife and I have 11 children!) I can unreservedly say that it’s one of the most exciting things we parents do. The reasons for this are as old as the world itself. Holy Scripture contains numerous examples of naming or giving names. For example, one of the first things Adam does is name all of the things in Creation. Moses was named when he was pulled from the Nile and set on the path to freeing the Hebrew slaves of Egypt. The Archangel Gabriel told the Theotokos, And behold, you will conceive in your womb and bear a son, and you shall call His name Jesus…Names distinguish one thing from another, give purpose and meaning to life, and firmly place one in history.

It is not a coincidence, then, that there are so many important rituals and events surrounding one’s name. We have birthdays, name days, Baptismal days, and for some, like monastics, days when they receive yet another name for the monastic life. One’s name tells the world a story about who we are and what we represent. It makes us part of something greater than ourselves and defines who we will be for eternity.

Naming a school is not unlike naming a child. In fact, the whole ethos and culture of the school often hinges on the person or persons from whom the school was named. For this reason, it is vitally important that a school name is unique, simple, and concise…that it represents all of the things the school was, is, and will be in the future.

Our school initially chose the name John of Chrysostom School of Lehigh Valley. John of Chrysostom was chosen because of his significance in the history of Christianity, as well as his exemplification of all the Christian virtues. Almost immediately, there were questions about our relationship with other schools having a similar name. When every conversation starts with a question… “What is your relationship to this other school?” it became clear that perhaps some consideration should be given to our name. Thus, when I became headmaster, we began a conversation about this question and how it could help or hinder the work we are trying to do in the Church and in the Lehigh Valley. We surveyed our Board members, talked with other priests and hierarchs, and of course prayed about the name and whether or not it was even necessary to change it. And of course, John of Chrysostom himself was consulted and there were numerous vigils and prayers asking for his intercession for our school. The response was overwhelming.  In the end, it was voted to change the name from John of Chrysostom School of Lehigh Valley to Saint Constantine Academy. The change is subtle enough that continuity is maintained, but different enough that there is no confusion about who we are. It is concise and simple, allowing us to maintain the momentum we have had (we will be the only Saint Constantine Academy in the United States—a distinction we are honored to hold) but also bring an inconspicuousness which we believe is important to the overall tone we are setting in the classical Orthodox school world. Please join us in saying Glory to God for all things about this development!

In addition to this, I am pleased to report that our beloved Gryphon has been given a name! After an initial submission of names, we narrowed the choices down to four, Gus, Godwin, Sasha, and Xander. Gus was the early favorite with just over one quarter of respondents nominating him. But then, like a Cinderella story, Xander tied, then took the lead edging out over Gus for the victory! Images of our new logos and Xander are included below.

Please keep our school in your good prayers and be on the lookout for an announcement coming about our Application for Admission in the next day or two. 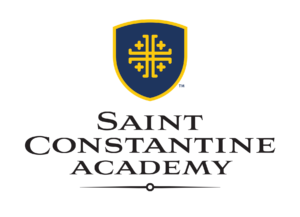